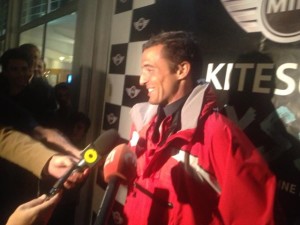 Francisco, 30 year-old kitesurfer, national champion in 2005, has sailed several times the Portuguese continental coast by boat but he always said: “…doing this with a kite is the thing!”

A few months ago he started to think that his dream had at least to be tried.

After investigating he found out one extra motivation for it: if he did the Portuguese coast from North to South he would become a world record holder for the Longest Kitesurf Journey without stops.

He then won even more motivation and began to prepare himself. He raised sponsors and partners as well as friends that helped him on this journey. Kite, board, boat, car, press, arrival and departure marinas, sea police, weather, and much more… a huge pack of things to deal with and organize. But since a world record was at stake and above all, a dream, he drew a rigorous plan at every level namely logistics, physical and phsycological so that everything went well.

During the preparation he did hours and hours of kitesurf, training in several points of the country and has even been 24 hours on top of a board inside a swimming pool t o understand how his body reacted to so much time standing. It was tough, but the test was succeeded.

Everything was being done so that when there was a 2 day window of good and strong wind, the Odyssey had its start. The good news don’t take long and arrive on the 16th of September: there is a good forecast for the next 2 days. It is then announced the start of the MINI Kitesurf Odyssey for the next day, the 17th, at 13h, from the Douro Marina.

At around 15h of the 17-09-2013 the big and so expected start takes place from the Douro river’s mouth. Goal number one: to break the world record, that may happen off the coast of Sines (200 nautical miles). Goal number two: Lagos! Expand the record more than 100 miles and make the 305 miles without stops in about 24-30 hours of kitesurf.

Always with the company of a support boat and a huge crowd of fans supporting online through the Facebook pafe, Francisco arrives at Raso Cape (Cascais) around 04 a.m. where more than 50 followers to give him support and make him continue! Family, friends and fans exchange a few words of motivation with Francisco. He thanks the support but has to continue and quickly sails beyond the Tejo river.

Several complicated hours follow in the Odyssey, due to lack of wind. Francisco takes 4 hours to cover a distance that he would normally do in a few minutes. What happened was that the kite was on the water due to not having enough wind. The fear that everything was done in vain was installed, and that the adventure would end near Cape Espichel only two ridiculous nautical miles from beating the world record. After those 4 hours the wind picked up and the World Record is beaten! After 20 hours Francisco sails the 200 nautical miles and becomes a world record holder.

The entire team celebrates in open sea and the Facebook fans go crazy: posts everywhere with likes and shares all around. Everybody was happy, that was all that matters on that day! The “F5″ key was damaged in several keyboards, due to so many page refresh on the GPS tracker online position page that Francisco provided. But to Francisco the party was more soft, after all the second goal was still compromised and there was many more yet to come. Next stop, Lagos.

At around 18h Francisco passes by the St. Vincent Cape in Sagres, one icon of the Portuguese Discoveries that very well fits on the background of this Odyssey. Lagos is 2 hours away, there are no more turns and time after time more boats with fans supporting start to appear. There was even a rumor that that the American navy was there to congratulate Francisco, the new world record holder (at the end it was not true, only because they were not so close by

Finally… finally he arrived! At the Marina de Lagos, a huge crowd of fans, press, friends, people just passing by… everybody was there to give a warm welcome to a hero that so much deserves after winning such a tough battle. The dream has become true! And we, far away or close by, loved to share this reality imagined by you Francisco.

Many congratulations and thank you for making us dream!

Below is the video and news piece of the arrival: